[This post was originally published nearly 2 years ago on a different blog site, but has since been removed. So that my readers may still have access to this article, I have republished here under a different title.]

As the layman class, of which I am a member, begins to come to terms with the possibility that their Sunday School teacher may have led them astray by teaching that the Son of God has been subordinate to the Father for all eternity, recurring questions and rejoinders are nevertheless heard in small groups and church foyers across the reformed-ish world.  They may have already come to terms with, for example, the multiple wills objection[1] and have become thoroughly convinced of the historical novelty of ESS/EFS/ERAS[2], even rightly concluding that the Council of Nicea and Athanasian Creed roundly contradict the teaching.  But, being students of the Scripture, submitting admirably to its authority, and seeking peace within the Church of God and charity towards those who may err, I have in my experience heard the following responses to ESS/EFS/ERAS critics over and over, and have read very little direct response to these rejoinders at the popular, accessible level:

END_OF_DOCUMENT_TOKEN_TO_BE_REPLACED

[This post was originally published in 2016 on a different blog site, but has since been removed. So that my readers may still have access to this research, I have republished here under a different title.]

[…]the idea of eternal equality in being but subordination in role has been essential to the church’s doctrine of the Trinity since it was first affirmed in the Nicene Creed, which said that the Son was “begotten of the Father before all ages” and that the Holy Spirit “proceeds from the Father and the Son.” Surprisingly, some recent evangelical writings have denied an eternal subordination in role among the members of the Trinity, but it has clearly been part of the church’s doctrine of the Trinity (in Catholic, Protestant and Orthodox expressions), a least since Nicea (A.D 325). (Wayne Grudem, Systematic Theology, Ch. 14)

Upon myself being surprised by Wayne Grudem’s “surprise” that Carl Truman and Liam Goligher would publicly accuse his work of not being consistent with Nicene Orthodoxy (see “Whose Position on the Trinity is Really New”), I thought it potentially fruitful, for the interested student, to compile in one place a hearty helping of Pro-Nicene sentiment. As my eloquence does not compare with that of the Cappadocian Fathers or Augustine (or Grudem himself for that matter), I intend to get right to the meat and potatoes and not rehash the controversy or assess it Biblically; many others have ably done this already.

Rather, I have selected 13 points used by Grudem to defend his claim that the Son is and was in a relation of eternal submission to the authority of the Father, and have put them in apposition to many passages from the corpus of the Pro-Necene Fathers (and, of course, Calvin). All of these points are present in his article, “Biblical Evidence for the Eternal Submission of the Son to the Father”, though my numbering does not correspond directly with Grudem’s.

END_OF_DOCUMENT_TOKEN_TO_BE_REPLACED 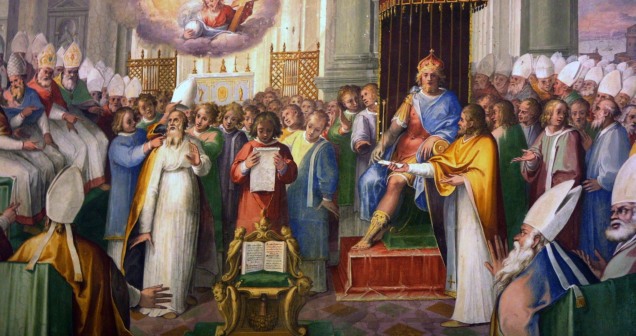 What Should Be Clear

Though I did intend in the first post of this series to disagree with Swain and Allen’s essay, “The Obedience of the Eternal Son,” I certainly did not want to misrepresent it. I think I have stated clearly that neither Scott Swain nor Michael Allen held to the Eternal Functional Subordination of the Son (EFS), nor was their essay intended to support it. It would make no sense in the context of their piece to argue that they did. The point of their essay was to show a path such that one could affirm the obedience of the eternal Son of God without succumbing to such ahistorical revisions of Trinitarian doctrine and metaphysics as found in EFS. They refer specifically the specter of identifying “obedience as the Son’s distinguishing personal property (usually identified as the Son’s ‘role’ in the Trinity),” pointing to Grudem and Ware in the footnote (p. 74).  Further, an eternal “functional” obedience would fare no better on these terms since the constant assumption throughout the piece is that one cannot divide the Being and acts of the Son of God.

END_OF_DOCUMENT_TOKEN_TO_BE_REPLACED

Proponents of the Eternal Subordination of the Son (ESS) are indeed aware of and openly opposed to the Semi-Arian teaching of an ontological subordination of the Son to the Father, that is, a subordination and hierarchy within the very nature, essence, or being of God; for such a position clearly contradicts the Nicene Creed, dividing the one Nature and Will of God, calling into question the co-equality of the Persons. Rather, they locate this subordination and hierarchy of authority within relations of function or role amongst the persons of the Godhead. This, they claim, distinguishes their position from the Arian heresy and shields them from their critics. As Bruce Ware puts it,

END_OF_DOCUMENT_TOKEN_TO_BE_REPLACED

I was reminded recently of the article “Why the Trinitarian Controversy Was Inevitable,” wherein Dr. Christopher Cleveland argues that the current Eternal Subordination of the Son (ESS) controversy was an inevitable result of the failures of modern academia, specifically noting the failures of Southern Baptist seminaries.  He refers, e.g., to SBTS’s replacing doctrinally unsound professors with conservative Biblicist professors in response to rising theological liberalism:

Because of this clash between the conservatives and the liberals within theological institutions of the time, there emerged an entire group of evangelical scholars who were trained in seminaries or in other related fields but were not trained in a way that cultivated in them an appreciation for the task of traditional dogmatics. Whether for reasons of neglect in their theological training under more critical theologians or because of their purposeful avoidance of dogmatics in favor of Biblical studies, a generation of evangelical scholars arose who had no serious acquaintance with the classical categories of theology developed in Patristic, Medieval, and Reformed orthodox thought. Nor did they have allegiance to those categories. What mattered in the fight against liberalism, in the minds of so many, was the Bible, not theology.

Elsewhere in academia, he continues, there was a resurgence of scholarship focusing on more dogmatic studies, working from traditional Reformed Scholastic categories.  The inevitable then occurred: to put it bluntly, the poorly educated Biblicist Baptists, incapable of testing doctrines by historic categories due to poor training or inattention, found themselves on a collision course with the Reformed orthodox likes of Carl Trueman and Willem J. Van Asselt over Trinitarian doctrine.

END_OF_DOCUMENT_TOKEN_TO_BE_REPLACED

Some Background and Statement of the Question

Of course the questions/push back from evangelicals has been to question how one could still believe in male headship in the home, as I do, yet reject both of the above metaphysical principles.  It is a good question and warrants more than a brief answer. If the metaphysic grounded in the ESS view of the Trinity is a metaphysic of oppression, then one must believe in the inequality of nature to maintain male headship, right?  And if one rejects both, then aren’t we left with egalitarianism as the only remaining option? I, of course, have no newfangled answer, nor my own special way of treating the subject; it has been treated better and more extensively by others.  Rather, I believe that the very asking of this question just shows how much subordinationist thought has infiltrated evangelicalism, so I hope only to point the reader in a different direction and perspective to continue studying the issue.

END_OF_DOCUMENT_TOKEN_TO_BE_REPLACED

George Whitfield believed that “Africans” were human but subordinate creatures and as such could rightfully be enslaved. He saw this as an act of beneficence on behalf of the white Christian slave holder. In like manner, Robert Lewis Dabney, while discussing “natural equality” states the following:

[…]if the low grade of intelligence, virtue and civilization of the African in America, disqualified him for being his own guardian, and if his own true welfare (taking the “general run” of cases) and that of the community, would be plainly marred by this freedom; then the law decided correctly, that the African here has no natural right to his self-control, as to his own labour and locomotion. Hence, his natural liberty is only that which remains after that privilege is retrenched.[1]

While hideous, the metaphysic of such a position was simple: those unequal in nature, being, dignity, and attributes are also unequal in relations, including authority and submission, right to command and duty to obey. “Equality” only extends to the individuals as a requirement for equal duty before God—one to care for his subordinate and the other to obey his superior. Equity was simply the Golden Rule practiced according to one’s natural lot.

END_OF_DOCUMENT_TOKEN_TO_BE_REPLACED

To those for whom ESS (Eternal Subordination of the Son) or EFS (Eternal Functional Subordination) or ERAS (Eternal Relation of Authority and Submission) or (is that all of them?) does not ring a bell, the following may not be all that interesting. Though debated off and on for at least the last 20 years or so, the popular claim that the Son of God is equal to the Father yet subject to His authority in all eternity, has over the Summer of 2016 come under intense scrutiny; and rightly so. Confessionally Reformed Christians and scholars from many quarters have demonstrated this teaching to plainly run afoul of Nicene Orthodoxy, with the potential to shipwreck some of the very pillars of orthodox Trinitarian doctrine.

So I was (momentarily) delighted when Ligionier Ministries updated their Statement on Christology to include an addition to “Affirmations and Denials” Article 2 (in bold below):

We affirm that in the unity of the Godhead the eternally begotten Son is consubstantial (homoousios), coequal, and coeternal with the Father and the Holy Spirit.

We deny that the Son is merely like God (homoiousios) or that He was simply adopted by the Father as His Son. We deny the eternal subordination of the Son to the Father in the ontological Trinity.

My delight quickly evaporated, however, when my very next thought was, “So does Wayne Grudem!”, the popularizer-in-chief of ESS/EFS/ERAS. He and most all proponents of the teaching also deny that the subordination or submission to authority is according to the Trinity as ontologically conceived. They point out consistently that such a position would constitute classic, literal, Arianism—to which we must agree.