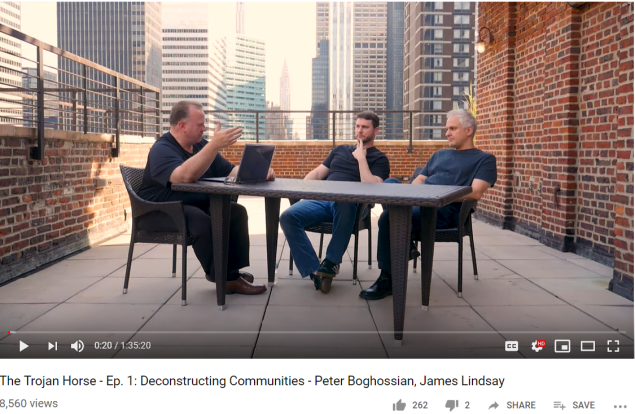 To be honest, though I should not be surprised by anything Sovereign Nations does, I was astonished to see an organization founded by the likes of Michael O’Fallon invite philosopher Peter Boghossian and mathematician James Lindsay to discuss the “Trojan Horse” of anti-Christian ideology supposedly contained in the Southern Baptist Convention’s infamous “Resolution 9” (see, “The Trojan Horse,” Aug. 9, 2019). The stated reasoning is that these men are liberal atheists with expertise in the field, and therefore have no “horse in the race” and are thereby particularly situated to warn against the evils of Critical Race Theory, even as an “analytical tool.”

Forgive me, but I question not only Boghossian and Lindsay’s supposed “expertise” in the field, but also their supposed disinterested standpoint. Even more important, I believe they are substantially incorrect in their assessment.

END_OF_DOCUMENT_TOKEN_TO_BE_REPLACED

One of the more frustrating trends in Evangelicalism is the incessant accusation of “Cultural Marxism” or “Critical Theory,” leveled against any who speak of “oppressor” and “oppressed.” This rhetorical move has insidious historical roots, but seems to have gained currency through wide-spread ignorance of both that which is being criticized and Critical Theory itself. We have sought to dispel this ignorance in the last two posts, clarifying precisely what distinguishes Critical Theory from its competitors. But I want here to likewise expose the absurdity of this further claim, viz., that the theme of “oppressor” and “oppressed” is a distinguishing characteristic of Critical Theory, such that all who appeal to the theme are liable to be lumped into this tradition.

No one denies that this theme is important to Critical Theory; it is, after all, a project of emancipation. But it is only one approach among many—many which likewise affirm the historic and persistent tragedy of human oppression via social institutions and relations.