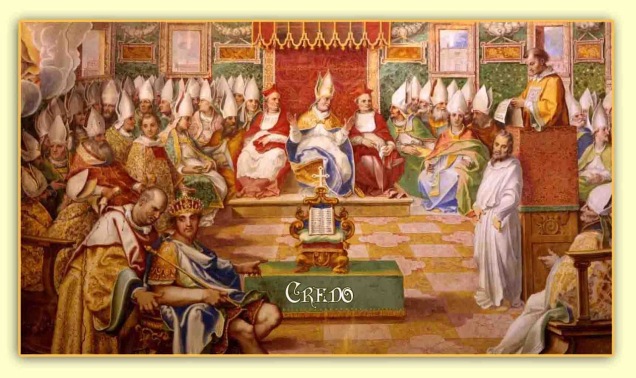 Proponents of the Eternal Subordination of the Son (ESS) are indeed aware of and openly opposed to the Semi-Arian teaching of an ontological subordination of the Son to the Father, that is, a subordination and hierarchy within the very nature, essence, or being of God; for such a position clearly contradicts the Nicene Creed, dividing the one Nature and Will of God, calling into question the co-equality of the Persons. Rather, they locate this subordination and hierarchy of authority within relations of function or role amongst the persons of the Godhead. This, they claim, distinguishes their position from the Arian heresy and shields them from their critics. As Bruce Ware puts it,

[…]the Father’s authority over the Son does not indicate he is superior to the Son because 1) the Father and the Son each possesses the identically same nature and hence they are absolutely co-eternal and co-equal in nature, and 2) authority and submission describe merely the manner by which these persons relate to one another, not what is true of the nature of the Father or the Son. In other words, authority and submission are functional and hypostatic, not essential (i.e., of the divine essence) or ontological categories, and hence they cannot rightly be invoked as a basis of declaring one’s ontology (nature) greater and the other’s lesser. Ontologically, the Father and Son are fully equal, but as persons, they function in an eternal Father-Son relationship, in which the Father always acts in a way that befits who he is as Father, and Son always acts in a way that befits who he is as Son. Their Father-Son manner of relating (functioning) is seen (in part) in the authority of the Father and submission of the Son, as is evidenced by the vast array of the biblical self-revelation of the Trinitarian persons.[1]

Or as Wayne Grudem states it,

But it seems clear to me (and others) that the words “function” and “role” are being used illicitly and beyond their normal meanings, in order to grant a veneer of plausibility to their unorthodox claims. To begin with, “function” already implies ontology, or properties of being, nature, or essence. Bruce Ware is absolutely correct when he states that, “function always and only follows essence. Put differently, what something can do is an expression of what it is”[3]. That is part of the very definition of “function”! And the use of “role” fares no better when squared with the body of ESS/EFS/ERAS teaching, for a role is by definition not a necessary relation, nor an eternally fixed relation; a role could have been otherwise and can always become otherwise. If one is in an eternal, necessary, counterfactual-excluding relation, then one is simply not in a relation of role.[4]

But in the end, regardless of the terms used, ESS is indeed about ontology and ontological subordination. “Ontology” is the study of fundamental being, nature, essence; it has to do with what makes something what it is, including what it must be to be what it is and what it cannot be and still be what it is. This is not the whole of the discipline of ontology, but it is essential to the meaning of “ontological”. When we speak ontologically of God, we are speaking of His very being, nature, and essence—those things which are fundamental to who He is and without which He is not who He is. Despite the reliance on “function” and “role” throughout the ESS literature, a simple ordering of the logic of their arguments quickly peels away the veneer of plausibility:

(1) God is ontologically Father, Son, and Holy Ghost, or He is not who He is:

[…]if all three members of the Trinity are equally and fully divine, then they have all three existed for all eternity, and God has eternally existed as a Trinity (cf. also John 17:5, 24). Moreover, God cannot be other than he is, for he is unchanging (see chapter 11 above). Therefore it seems right to conclude that God necessarily exists as a Trinity—he cannot be other than he is. (Grudem[5])

(2) There are no distinctions amongst the persons of the Godhead except in relations:

[…]it may be said that there are no differences in deity, attributes, or essential nature between the Father, Son, and Holy Spirit. Each person is fully God and has all the attributes of God. The only distinctions between the members of the Trinity are in the ways they relate to each other and to the creation. In those relationships they carry out roles that are appropriate to each person. (Grudem[6])

There is no difference in attributes at all. The only difference between them is the way they relate to each other and to the creation. (Grudem[7])

(3) In eternity, the fundamental relational distinction between the Persons of the Trinity is their internal relations of subordination.

The heresy of subordinationism, which holds that the Son is inferior in being to the Father, should be clearly distinguished from the orthodox doctrine that the Son is eternally subordinate to the Father in role or function: without this truth, we would lose the doctrine of the Trinity, for we would not have any eternal personal distinctions between the Father and the Son, and they would not eternally be Father and Son. (Grudem[8])

Authority and submission between the Father and the Son, and between both Father and Son and the Holy Spirit, is the fundamental difference between the persons of the Trinity. (Grudem[9])

[…]support will be offered for the church’s long-standing commitment to the Trinitarian persons’ full equality of essence and differentiation of persons, the latter of which includes and entails the eternal functional subordination of the Son to the Father, and of the Spirit to both Father and Son. (Ware[10])

(4) Or, that the Father is “Father” and the Son “Son” entails that, and is entailed by, the submission of the latter to the former and the authority of the former over the latter:

Clearly, a central part of the notion of “Father” is that of fatherly authority. (Ware[12])

The names “Father” and “Son” represent an eternal difference in the roles of the Father and the Son. The Father has a leadership and authority role that the Son does not have, and the Son submits to the Father’s leadership in a way that the Father does not submit to the Son. (Grudem[14])

(5) Therefore God is not Father, Son, and Holy Ghost unless there is an order of subordination within the Godhead:

And by (1) we must conclude that God is not who He is without an eternal order of subordination! That, my friends, is an ontological statement—an ontological subordination—and it absolutely contradicts the Nicene formula. If (a) God is ontologically triune, (b) the triunity of God is defined by the relational distinctions of Father, Son, and Spirit, and (c) father-ness and son-ness necessarily imply authority and submission, then we must conclude that the supposed relation of subordination is necessarily definitive of the very being, nature, and essence of God. The subordination of the Son to the Father would be no more a functional role than is His eternity, omnipotence, or immutability.

Grudem, Ware, and any who make the above quoted arguments, are indeed arguing for an ontological subordination, whether they would like to acknowledge it or not. Though we ought never impute the implications of a position to those who consciously and overtly reject such implications, we nevertheless can and should conclude that the logic of ESS arguments does indeed imply Semi-Arianism.

[1] “Knowing the Self-Revealed God who is Father, Son, and Holy Spirit”

[4] See Kevin Giles, “The Genesis Of Confusion: How ‘Complementarians’ Have Corrupted Communication”

8 thoughts on “The Semi-Arianism of ESS Arguments”